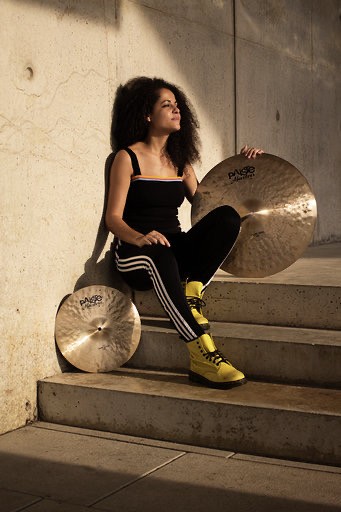 Introducing Berklee educated 24-year-old drummer Jas Kayser. Mentored by Terri-Lyne Carrington and currently moving between London and Panama City, where she teaches at pianist Danilo Perez’s Jazz Foundation, she’s also a composer and band leader who loves to explore the commonality between jazz and afro-beat.

Jas has featured in bands with leading British lights Nubya Garcia, Ashley Henry and Jorja Smith as well as American drummer Ralph Peterson’s Big Band and had a starring role on drums alongside Lenny Kravitz in the official video for his song Low.

Jas’s more recent projects have been presenting her original band at some of the top jazz venues for the London Jazz Festival 2019, RISE concert in Boston supporting Terri Lyne Carrington and Panama Jazz Festival for the past 2 years.

“My absolute favourite thing about being a musician is the many new people you get to meet (daily!) musicians or non-musicians. The places the music takes you around the world. And the musical family and support you gain through doing something we all love, believe in and do to serve the greater good of the world!”

NYJC was an amazing place to learn and hang with other jazz musicians my age. The same people I hang and play with now! NYJC has been a huge part of my jazz education – I particularly remember being assigned to learn and sing Mile’s solo on ‘So What’ on my first NYJC Course (The short course). I think that was the first time I learnt a solo, never mind a drum solo, and 100% has an impact on the way I learn music/standards to this day”.